Barney Frank on Mitt Gets Worse

If you want to sum up his evolution on LGBT rights, "Mitt Gets Worse" is a very accurate phrase.

A Romney presidency would be a serious setback. It's up to all of us to make sure Mitt can’t repeat his Massachusetts record as in Washington.

Join me in pledging to vote for equality in November - add your name using the form on the right.

You, Sir, are no Ted Kennedy 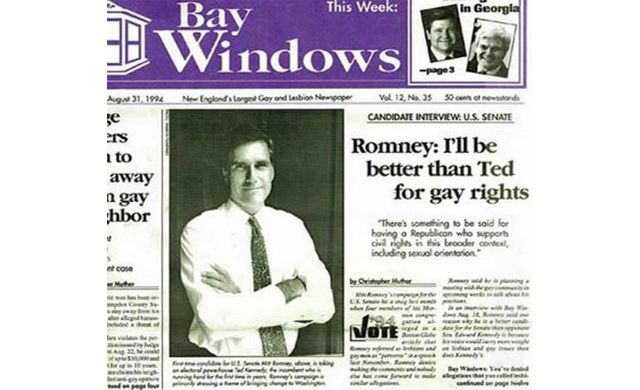 When Romney ran against Ted Kennedy in 1994, his campaign promises included being better for LGBT equality than his opponent — a stark contrast to Romney’s record ever since. Romney made the bold claim in a letter to the Log Cabin Republicans. Then, Mitt Got Worse.

Romney Used To Support Gay And Lesbian Rights. According to the Boston Globe, “When he ran against Ted Kennedy for the Senate in 1994, Romney wrote a letter to the Massachusetts Log Cabin Club, pledging that as ‘we seek to establish full equality for American gay and lesbian citizens, I will provide more effective leadership than my opponent.’ [Boston Globe, 11/26/06]

Paid for by American Bridge 21st Century
and Courage Campaign SuperPAC.
Not authorized by any candidate or candidate's committee.